Oklahoma Governor Mary Fallin today delivered her 2014 State of the State address (click here for complete address) to a joint session of the Oklahoma Legislature. In it, Fallin outlined her legislative priorities and agenda for the coming year. The governor focused on job creation, reducing government spending and waste, improving school safety, supporting education, cutting taxes and standing up to federal intrusion and Obamacare.

The following includes highlights and excerpts from Fallin’s State of the State address. 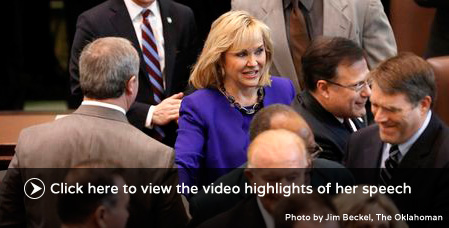 Oklahoma’s economy: Fallin discussed the dramatic turnaround the Oklahoma economy has made since the Great Recession.

“We know we’re on the right track because the policies we’ve implemented over the last three years are working. Oklahomans are getting back to work and earning more.

“Our 7.2 percent unemployment rate is now down to 5.4 percent. Oklahoma families have seen their incomes rise by over 6.3 percent since January 201l. That’s 44 percent higher than the national average and second in the nation.”

“This is a responsible plan for improving safety and security at Oklahoma schools. We aren’t forcing new taxes on Oklahoma families or businesses. We aren’t passing new mandates. Most importantly, we are making our schools safer.”

Education: Fallin highlighted plans to increase educational outcomes for all levels of education.

“I believe that every child can learn. Our job as a state is to empower our students, parents and teachers to succeed by setting the bar as high as we can. …

“That’s why we need to work relentlessly on two fronts: First, we must improve K-12 public school results. … Second, we have to increase the number of Oklahomans who continue their education beyond high school, either by attending college or a career technology center. A high school diploma is not enough.”

Budget Reductions: Many agencies in Fallin’s executive budget receive 5 percent budget cuts and have been asked to find ways to operate more efficiently and effectively.

“…my budget proposes targeted spending cuts and asks our agencies to continue to find ways to operate more efficiently and effectively and to cut waste.

“In the coming days and weeks, we know what we’ll hear. Those who like bigger government and higher taxes will say the sky is falling. Entrenched interest groups and even some agency heads may say the same thing.

“But guess what? It’s not. The cuts we’ve proposed this year amount to five percent or less of agency budgets, and in total amount to about one percent of state spending. Any business worth its salt can find five percent costs savings without crippling the services it provides.”

Pension reform and employee compensation: Fallin called on the Legislature to work with her to address the imbalance between state employee pay and benefits. She advocated for new hires under the Oklahoma Public Employees Retirement System to be moved from a defined benefit to a defined contribution plan.

“…new hires within the Oklahoma Public Employees Retirement System should be moved from an outdated, mid-20th century pension system and to the more portable and flexible 401k-style benefits used in the private sector.

“Businesses made this change a long time ago, recognizing that the old pension model didn’t appeal to a more mobile workforce in today’s modern economy. It’s time for state government to stop playing catch-up.”

“Raw sewage is literally leaking into the Capitol basement. On “good” days, our visitors and employees can only see the disrepair. On bad days, they can smell it.

“We must begin repairing the People’s House now. The best, most realistic way to accomplish this is through a bond issue.”

Rejecting Obamacare: Fallin reiterated her opposition to the Medicaid expansion in Obamacare

“We cannot plunge this nation further into debt, or place Oklahoma on a fiscally unsound path, by expanding Medicaid. Both the president’s plan and alternative proposals that rely on federal dollars in the Affordable Care Act amount to the same thing: a dramatic growth in unsustainable government spending.

“Washington wants to lead this nation in the wrong direction – but Oklahomans will not be led astray. We will find our own way forward, a better way.

Tax Cuts: Fallin called for a .25 percent reduction in the state income tax.

“I believe responsibly lowering the income tax is the right thing to do. This is the people’s money; it should stay with the people. It is the people and the private sector, not state government, that are the true engines of job creation. When we lower taxes we allow them to invest in their businesses, spend dollars in the economy, and help to create Oklahoma jobs.”