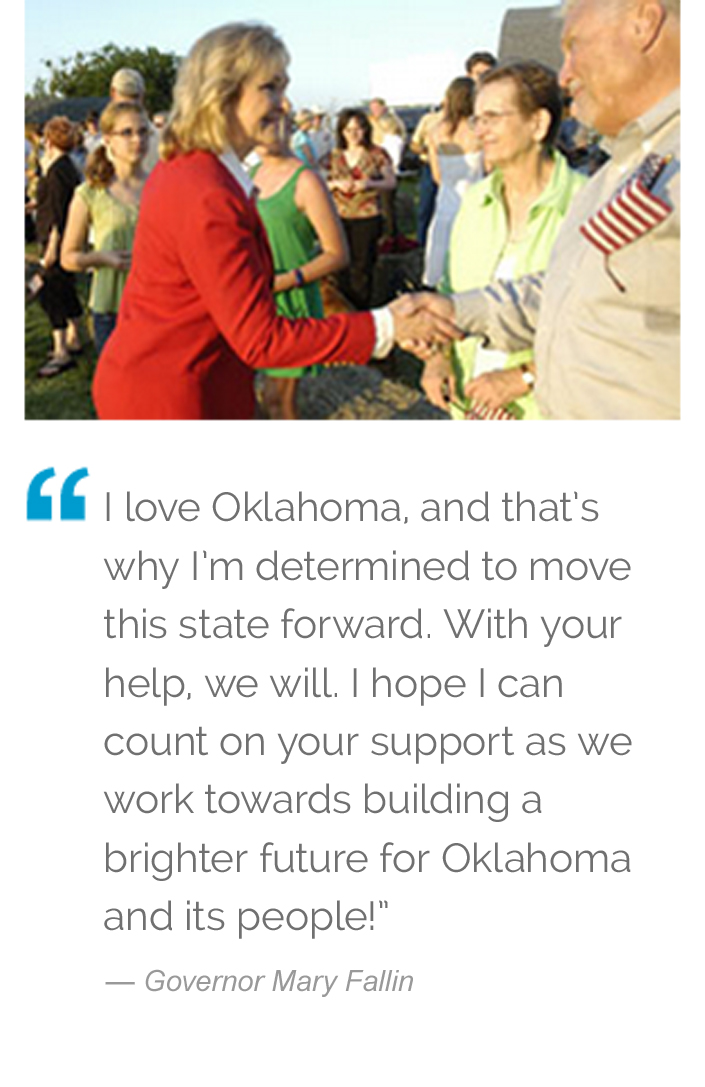 As the first female governor of Oklahoma, she is often called a “trailblazer.” What she’s more proud of, however, is helping to lead the Oklahoma Comeback.

In 2011, Mary Fallin took office in the midst of a recession. Oklahoma’s unemployment rate had climbed to seven percent. The economy was stagnant. State government faced a budget shortfall of $500 million and the Rainy Day Savings Account had only $2.03 in it.

Governor Fallin got to work. To help create jobs and boost the economy, she partnered with conservative lawmakers to pass pro-business reforms like tax cuts, lawsuit reform and a complete overhaul of the state’s workers’ compensation system.

To eliminate government waste and help close the budget shortfall, she worked to consolidate or eliminate dozens of agencies, boards and commissions. She also prioritized spending needs, making tough budget cuts while still providing the necessary funding for priorities like education, public safety and health services.

Governor Fallin also stood up to the Obama Administration, saying “no” to the ObamaCare Medicaid expansion that would have driven the state off a fiscal cliff.

Here are the results of her conservative, commonsense policies:

Oklahoma has battled back from the Great Recession and is now moving in the right direction.

Governor Fallin wants to ensure that we build on that forward momentum. She continues to work to right-size government agencies, reduce cost-drivers to small business, and boost the quality of life in Oklahoma by improving services in areas like mental health and child welfare.

As the new chairman of the National Governor’s Association, Governor Fallin has also turned the attention of the nation’s governors towards the importance of education and workforce training. Her Chair’s Initiative, entitled “America Works: Education and Training for Tomorrow’s Jobs,” focuses on the necessity of post-secondary education in accessing the middle class.

Governor Fallin and her husband Wade Christensen have six children between them. Both parents are working to ensure their children live in the best possible state to work, raise a family, and call home.